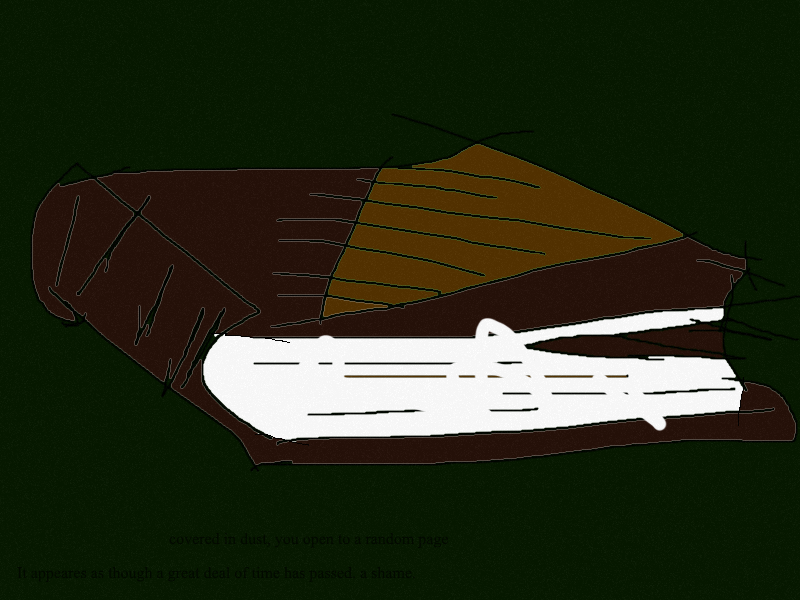 You turn on the light to find a nice, simple and clean room. Nobody is here, but you do find a worn diary laying on a desk. You sit down slowly, and turn open the first page.

I awake to the sounds of the island birds and the sunlight peaking through the window. I hada cup of coffee, a muffin, and eggs for breakfast...sunny side up. I like to drink my coffee black, especially lately, to keep my mind sharp. The bitterness is pretty nice if you're willing to look around for nice coffees. The muffins are my own, with plenty of nutrients to get me started on my day. They had a nice sweet flavor, but it wasn't like candy or anything. And the eggs...got messed up. I cooked them too long...but they don't really taste bad. Just not all that great. Even these bad eggs I ate happily, for the day ahead of me is great.

As I ate, I listened intently to the news over the radio. The island has seen more political conflict this year than the last couple of decades. The tension had people worked up, with the first murder in four years occurring last month. And now...another, a body was found by the docks full of holes and tied to the pier like a fish with a hook through the cheek. The man was young, a minor player in a local gang that had been quiet for some time. At this point, it was unknown whether or not the killing had to do with his gang affiliation. Or at least, the authorities aren't willing to divulge that information. It's not totally unbelievable though... Until now there hadn't really been any kind of political violence, but it's only natural that the clashes in government might trickle down to crime organizations. They're all tied up in that business, and aren't afraid to get their hands dirty. But the way the body was found is really heinous...really disgusting to do that to a person.

In town, people were all buzzing about. Truthfully, it's no surprise that the hubbub might produce a couple of bodies. After all... the PDP were talking about encroaching on parts of the island that we have left undisturbed. The plan comes with some promising economic benefits, but we shouldn't disturb the land. That's what I think, and people here in general have always been pretty respectful of our environment. It's only natural that there might be clashes. But today I'm going all the way out to the other side of the island to see if I can reach an understanding with people. I'll report back later.

You close the diary...go back